Modernism is a wide-reaching cultural movement in Western society which began in the late 19th and early 20th centuries and continues to the present day. In the arts, early Modernism was marked by a series of overlapping stylistic movements âImpressionism, Post-Impressionism, Symbolism, Fauvism, Expressionism, and Cubism, among othersâwhich embraced non-traditional and experimental methods, subjects and themes. Cubism, in particular, made a major impact and led to many different artistic responses and reactions, including Dada, Bauhaus, Russian Avant-Garde, and Surrealist styles. Overall, the first half of the 20th century witnessed a growing public acceptance of ânon-objectiveâ art, coupled with commercial viability. Many artists continued to produce Modern works through the post-World War II years, including prints which could be widely disseminated.

This exhibition features 20 prints by artists from various European countriesâFrance, Spain, Italy, and Germanyâall working in Modern styles. Many were based in or traveled to Paris, an international hub of Modern art, at some point in their careers. With some prints, the artists have translated representational images through an abstract filter or sensibility; with others, only the title of the work serves as a guide to the abstract content. Together, these artworks illustrate the widespread interest in Modernism from the 1920s through the 1960s, and highlight the diversity and individualism of European artists, as they responded to the changing Modern world around them.

Click any image below to begin browsing through the collection.

< back to Browse the Collections 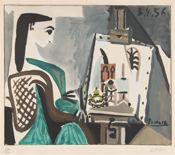