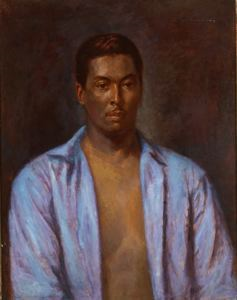 Bloch was an important social realist artist known for his sympathetic portrayals of poor and oppressed working class people, particularly African Americans. Born in Germany, he immigrated to Philadelphia with his Jewish family in 1893. He worked for the Federal Art Project during the Great Depression and was âwidely recognized for his psychological character studies of the Negro,â as noted by distinguished African American educator Alain Locke in 1940. Bloch was influenced by American realist artists such as Thomas Eakins, and he taught painting at the Pennsylvania Academy of the Fine Arts from 1947-1962. This portrait of Bobby Fields belongs to a number of portraits of African Americans that Bloch made during these years, including a portrait of the artist Horace Pippin, who had recently risen to fame.
Current Location: Art Museum : 20 C Hallway

Conservation
- 2013 - Conserved with Support from the Stockman Family Foundation
For more information: http://artmuseum.lasalle.edu/exhibits/show/conservation-treatments/paintings/man-in-a-blue-shirt

- 2009 - In need of conservation - Included in the IMLS survey
For more information: http://artmuseum.lasalle.edu/exhibits/show/conservation-surveys/paintings/man-in-a-blue-shirt
Exhibitions

Your current search criteria is: Objects is "Man in the Blue Shirt, Bobby Fields".