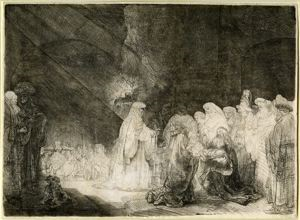 Presentation in the Temple

Luke 2: 22-39 narrates the story of Mary and Joseph presenting the Christ Child in the Temple of Jerusalem. This Jewish religious practice required parents to bring a child to the Temple forty days after its birth. Mary and Joseph bring Jesus to the Temple and encounter two inÂ­dividuals often called the last Old Testament prophets. One is the elderly scholar Simeon, who received Godâs promise that he would not die until he had met the MesÂ­siah. The other is an elderly widow Anna, known as the Prophetess, who recognized the Child as the Messiah.

Rembrandtâs composition highlights the two prophets in this version of the narrative. In the cavernous architecÂ­tural setting of the Temple, the aged Simeon kneels and holds the Child. He declares to the solemn Mary that she and the Child will know undergo great tribulations in their lives, as the gathered faithful look concerned. The tall Anna, wearing the Judaic prayer shawl, strides towards the group, her hands extended as she recognizes the Messiah. The light emanating from the Holy Spirit, positioned above Annaâs head, spotlights the Child. In the left foreground of the print, untouched by the light, are a Saducee and a Pharisee, deep in argument, and cuÂ­riously, a dog.

Rembrandt was a careful reader of the Bible and other religious texts, as his images attest. Like many 17th-century Dutch Christians at the time, he had a special interest in typology, which was the practice of reading the Old Testament as prophesy and the New Testament as fulfillment of that prophesy.2 The Presentation in the Temple, however, illustrates the collision of the Old and New Testament narratives, in which the characters of the first recognize their prophetic work as completed. Rembrandtâs print illustrates the significance of this moÂ­ment.


- Printmakers of the Baroque: 17th-Century Explorations of Space and Light, Curated by Susan M. Dixon and Carmen Vendelin, La Salle University Art Museum, December 16, 2013 â February 28th, 2014.
Dimensions
Portfolio List Click a portfolio name to view all the objects in that portfolio
This object is a member of the following portfolios:

Your current search criteria is: Portfolio is "Baroque Art".