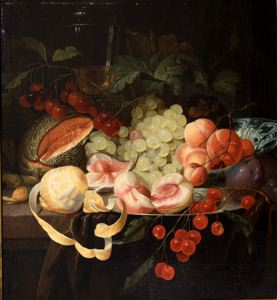 Hannot was a Dutch still-life painter, inspired by the works of Jan Davidsz. De Heem. De Heem was much admired for his ability to imitate the appearance of fruits, flowers and other precious objects. Such paintings are often thought to convey ideas about the transience of life (also known as vanitas imagery), as seen here in the half-empty goblet of wine and the peeled lemon. They also, however, foreground the prosperity of the country, which was built on seafaring: the figs, lemons and striking Ming ceramic vessel were luxury items imported from foreign lands. Hannot was also a wine merchant, and most of his paintings contain one or more glasses of wine.
Current Location: Art Museum : 17 C Gallery

Your current search criteria is: Portfolio is "Baroque Art".