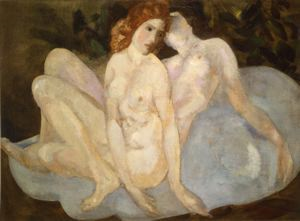 Daviesâs career embodies the contradiction between his role as Armory Show organizer and painter of diaphanous nymphs, such as the Two Spirits. The Armory Show (1913) introduced European Modernism to an American audience. Davies own art, however, despite a brief flirtation with Cubism and the moderate flattening and simplification of forms evident in Two Spirits, was more conventional than the abstract and other art styles represented in the Armory Show. Similarly, though a member of âThe Eight,â his work evidences none of the gritty social realism of other Ashcan artists. He instead focused on decorative, rhythmic form and employed soft, muted colors in his work.

Your current search criteria is: Objects is "Two Spirits".