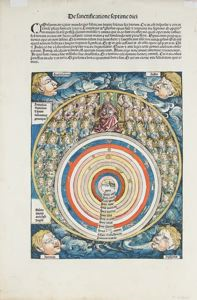 Our conception of how the universe is structured changed dramatically between 1400 and 1750. In this early image from the Nuremburg Chronicle, God and the hosts of heavenly angels and saints surround the starry firmament, at the center of which celestial orbsâincluding the sun and the moonâcircle the planet earth and its four constituent parts: fire, air, water and earth. The outer ring contains the 12 signs of the Zodiac.
Current Location: In Storage

Your current search criteria is: Portfolio is "Religion in Art: Old Testament" and [Objects]Century is "15th Century".