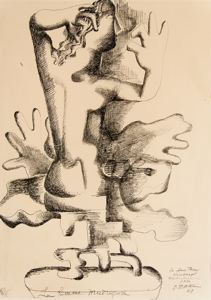 
Object Type: DRAWINGS
Creation Place: Europe
Medium and Support: Pen and ink, graphite on paper
Accession Number: 78-D-132
Ossip Zadkine was a 19th and 20th century Franco-Russian sculptor, draughtsman, and printmaker who was born in Russia, but lived in France for much of his career. In particular, Zadkine lived in the Montparnasse neighborhood of Paris where he was exposed to major artists of the day such as Picasso, Apollinaire, Max Jacob, Andre Salmon, and Modigliani. His style, most significantly influenced by Marc Chagall and Fernand LÃ©ger, is largely an expression of the hardships of Zadkineâs life. He was the victim of gas poisoning twice while fighting on the front during World War I and felt compelled to relate his horrifying experiences through a new formal language based in Cubism. Zakineâs pre-war work, marked by elegant linear sensitivity, makes a sharp contrast against the harsh, sculptural style of his post-war creations, using an exaggerated point of view with unrealistic spatial settings for his figures and dynamic geometric shapes.


- The Line is the Lead, Curated by Caroline Wistar, La Salle University Art Museum, February 19 â May 18, 1993.
Dimensions
Portfolio List Click a portfolio name to view all the objects in that portfolio
This object is a member of the following portfolios:

Your current search criteria is: Objects is "La Femme Madrepose".