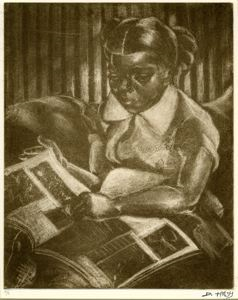 Thrash depicted African American subjects in an era when many worried that being labeled an African American artist, rather than just an artist, would marginalize their work. Langston Hughes, Alain Locke, and Marcus Garvey called for race-conscious art and Thrash was among the artists who embraced their thinking.

Here Thrash depicts a little girl absorbed in the act of reading Life magazine. The choice of Life magazine emÂ­phasizes the girlâs identity as an American. Art historian Richard Powell asserts that the ânon-racial genreâ image soft sells the idea of âcommonalityâ and âunityâ rather than separation in the African American experience of childhood.

Between 1930 and 1947, African American illiteracy rates stood at 11-18% compared with 2-4% for European Americans.3 Thrash had left school after fourth grade, which was not uncommon for an African American growing up in rural Georgia in the early 20th century. Thrash was an autodidact who studied by correspondence while living on the road as a teenager before attending the School of the Art Institute of Chicago. The act of reading was no doubt intended to communicate a posiÂ­tive affirmation of the sitterâs literacy, intelligence, and cultural savvy.