The Large Passion: Christ in Limbo (The Harrowing of Hell) 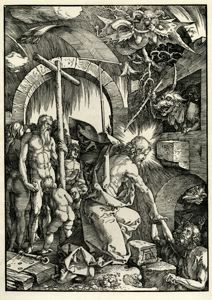 The Large Passion: Christ in Limbo (The Harrowing of Hell)

After Christâs death and resurrection, he walks on earth for three days before his final ascent into heaven. During this time, he descends towards Hell (or Limbo), which is guarded by fantastic demons. There he breaks open the gates and releases all of the just people who were born before his time, including Adam and Eve, redeeming them from original sin. Representations of this scene were popular in the Medieval and Renaissance periods, particularly in Byzantine art, where the Harrowing of Hell was also known as the Anastasis (Greek for âResurrectionâ).
Current Location: In Storage

Your current search criteria is: Objects is "The Large Passion: Christ in Limbo (The Harrowing of Hell)".