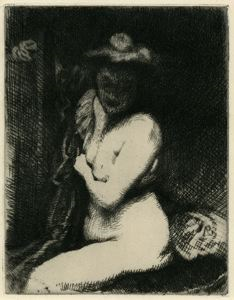 Besnard remains one of the finest examples of an artist whose Impressionist sensibilities translate into a deeper, sensuous art form. His ability to create a sense of mood and atmosphere impressed Symbolist critics. An acclaimed student at the Ãcole des beaux-arts in Paris, Besnard was honored with the distinguished Prix de Rome award. Besnardâs lyrical approach is generally characterized by a desire to capture the softness and contrast of light and form. La Toilette combines his tender, feminine style with the femme fatale motif as
evidenced by the womanâs darkly hidden face. As Gabriel Mourey describes in his biography of Besnard, âhe sings the triumphs and the intimacies of a woman, moving among the games of light, in the apparatus or abandonment of its beauty.â The accompanying essay in the Gazette des beaux-arts notes that Besnard was raised by a caring mother who fostered his affectionate style, saying he âwas formed in the environment most conducive to the development of his sensitivity and the flight ofimagination.â The entry also notes the artistâs respect for Ingres, and his desire to emulate the softness of thewomen in his paintings.

Your current search criteria is: Objects is "La Toilette".