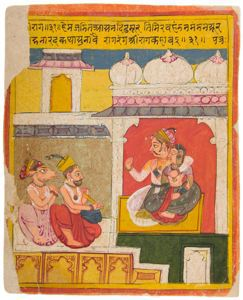 Depicting the North Indian classical music mode Shri Raga, this painting is from a Ragamala series. While it can be identified by the verse in the text box at the top of the image, it is also recognizable from the composition. Shri Raga is most often depicted as a musical performance in a court setting, where royals are being entertained by two musicians, one with an animal head (usually a kinnara, or horse-headed figure).
Current Location: In Storage

Conservation
- Conserved in 2014-2015 with support from the E. Rhodes and Leona B. Carpenter Foundation
Exhibitions


- Poetic Visions: Indian Art from the Permanent Collection, Co-Curated by Mekala Krishnan and Klare Scarborough, La Salle University Art Museum, December 17, 2014-February 27, 2015.
Dimensions
Portfolio List Click a portfolio name to view all the objects in that portfolio
This object is a member of the following portfolios:

Your current search criteria is: Objects is "Shri Raga: Couple Seated in Pavilion, Serenaded by Musicians".