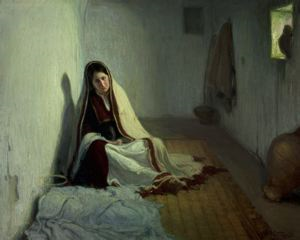 In this unconventional rendering of the Virgin Mary with the Christ child, Mary appears melancholy and lost in thought. The infant is almost completely covered by a shroud-like cloth, suggesting a foreshadowing of Jesusâ death. Tanner paid careful attention to details studied first-hand in Jerusalem, where he first traveled in 1898. Tannerâs style is academic and is distinctive for his use of luminous lighting. The model for Mary was newlywed Tannerâs Swedish-American wife. Tanner studied with Thomas Eakins at the Pennsylvania Academy of Fine Arts in the 1880s before traveling to and eventually settling in Paris, where, from 1894 on, his work appeared in the annual, juried Salon. Mary is in its original tabernacle frame with its Salon entry number, 1252, and another label noting Tannerâs previous Salon medal for an earlier painting. While it was common for American artists to travel to Paris to study art and even settle in that art-making capital, Tanner attributed his choice to remain there to the racism he encountered in the United States as an artist of mixed African-, European-, and Native-American ancestry and his ability to be judged simply by his talent in France.