Back of Draped Female Holding Vase 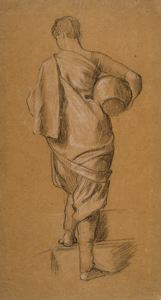 Back of Draped Female Holding Vase

Eakins was arguably the greatest American Realist of his generation. He was important as an educator as well as a painter. Born in Philadelphia, he studied at PAFA and took anatomy courses at Jefferson Medical College in the 1860s, then traveled in Europe and studied with French Realist painters Jean-LÃ©on GÃ©rÃ´me and LÃ©on Bonnat. He was concerned with rendering anatomical precision in his art, and he stressed the importance of working from live models rather than sculptural casts. He returned to Philadelphia and began teaching at PAFA in 1876. He served as director of the school from 1882 to 1886, advancing the institutionâs prestigious reputation and attracting talented students who emulated his figural drawing techniques, as exemplified in Back of Draped Female Holding Vase.

Conservation
- 2015-2016 - Conserved with Support from the Stockman Family Foundation
For more information: http://artmuseum.lasalle.edu/exhibits/show/conservation-treatments/drawings---watercolors/figure-with-urn

Your current search criteria is: Objects is "Back of Draped Female Holding Vase".