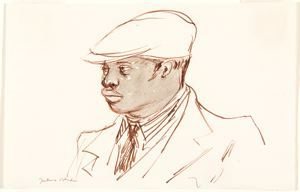 Study of a Black Man

Bloch was a prominent German-born Jewish artist who immigrated to Philadelphia with his family in 1893. He studied at the Philadelphia College of Art (now University of the Arts) and PAFA, where he was influenced by Thomas Eakins. He became an important Social Realist artist known for his sympathetic depictions of working class people, particularly African American men. During the Great Depression, he worked for the Federal Art Project and received national attention for his portrayals of poor and oppressed groups of people. He became an instructor at PAFA in 1948. His work was featured in a major retrospective at the Philadelphia Museum of Art in 1983. These two artworks illustrate variations in Blochâs drawing techniques, from a detailed portrayal of facial features in Study of a Black Man, to a sketchier rendering of an outdoor scene in Shoe Shine Boy.

Conservation
- 2015-2016 - Conserved with Support from the Stockman Family Foundation
For more information: http://artmuseum.lasalle.edu/exhibits/show/conservation-treatments/drawings---watercolors/study-of-a-black-man

- 2009 - In need of conservation - Included in IMLS survey
For more information: http://artmuseum.lasalle.edu/exhibits/show/conservation-surveys/drawings/study-of-a-black-man
Exhibitions