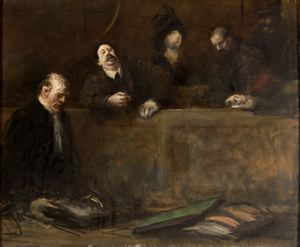 
Object Type: PAINTINGS
Creation Place: Europe, France
Medium and Support: oil on canvas
Credit Line: Gift of Mr. and Mrs. Julius Rosenwald, II.
Accession Number: 89-P-353
Forain was a master etcher, lithographer and draughtsman of social and political satire. He provided a prolific body of illustrations for daily and weekly Parisian magazines and newspapers throughout his career, especially Le Figaro. It is perhaps due to the illustrious stature of his two mentors, Daumier and Degas, as well as the popularity of his prodigious journalistic output, that his paintings have not received the attention they so often deserve. These works are divided into two periods. Up until the end of the 19th century, Forain concentrated on genre scenes in and around Paris. His concern was to capture the human figure from all walks of life engaged in a wide variety of activity, and painted with much light, bright colors and generally in a mood of joy and gaiety. The spontaneity and candid format of these paintings strongly suggest the influence of Degas.

In the second half of his career, to which this painting belongs, his works became very somber in tone, sometimes almost monochromatic, and reflect the more serious side of Forainâs character. It is felt that this change of style and subject matter was a reflection of his moral conscience for the underpriviledged, and his need to express some of the poverty and suffering that he himself had experienced. 1 Around 1902, Forainâs particular concern for the injustices prevailing in the judiciary system, prompted him to begin a series of paintings of Court Room scenes as typified in this work. Laying aside his caustic wit, he became inspired by the Courts of Justice paintings of his predecessor, Daumier. And there are many echoes of Daumierâs style in Forainâs paintings as seen here: somber heavy colors, broad sketchy brushwork, horizontal format are among the more obvious correlations. Forain has successfully captured the tension of the trial as the accused awaits the outcome. The pomposity of the judge and lawyer (?) who dominate the foreground, are compared to the resignation and despair of the accused and the associates relegated to the background, their identity heavily veiled. And the viewer is led to sympathize with the tragic plight of the suspect so effectively evoked here in this image.

This painting was donated by the eldest son and the daughter-in-law of the late Lessing Rosenwald, Americaâs foremost print collector and an avid admirer of Forainâs works, which he acquired with much enthusiasm.
Current Location: Storage : Hanging Storage : 4B


- Recent Acquisitions, Curated by Caroline Wistar, La Salle University Art Museum, September â October, 1989.
Portfolio List Click a portfolio name to view all the objects in that portfolio
This object is a member of the following portfolios: