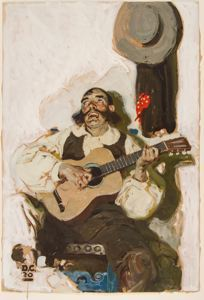 Cornwell was an illustrator and a muralist. Born in Louisville, Kentucky, he studied at the Art Institute of Chicago and at the Art Students League of New York. Nicknamed the âDean of Illustrators,â Cornwellâs designs appeared in newspapers such as The Louisville Herald and The Chicago Tribune; in popular journals such as Cosmopolitan, Harperâs Bazaar, and Good Housekeeping; and in books by Pearl S. Buck, Ernest Hemingway, W. Somerset Maugham, Owen Wister and others. He painted over 20 public murals, including the Los Angeles Public Library in the late 1920s, Rockefeller Center in New York, and the 1939 World's Fair. He taught at the Art Students League and elsewhere, and his work has been exhibited in numerous museums, including the Whitney Museum of American Art, PAFA, and the National Academy of Design.

Conservation
- 2015-2016 - Conserved with Support from the Stockman Family Foundation
For more information: http://artmuseum.lasalle.edu/exhibits/show/conservation-treatments/drawings---watercolors/serenading-cowboy


- 2009 - In need of conservation - Included in IMLS survey
For more information: http://artmuseum.lasalle.edu/exhibits/show/conservation-surveys/drawings/serenading-cowboy
Exhibitions