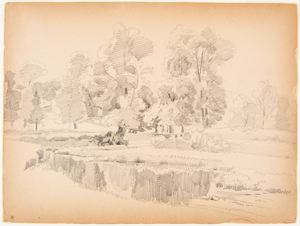 Peter Moran was a British-born American landscape painter and etcher. He came from a family of painters, including his two older brothers, Thomas and Edward. Most of Moranâs career was spent in Philadelphia, where he had a successful career as an etcher. He and his family also ventured to the American West, visiting Yosemite, the Teton Mountains, New Mexico, Arizona, and Mexico itself. Although his brothers mostly painted marine and traditional landscapes, Moran was primarily interested in animal subjects. He was particularly fond of cattle and often painted them in addition to more traditional landscapes.

Conservation
- 2015-2016 - Conserved with Support from the Stockman Family Foundation
For more information: http://artmuseum.lasalle.edu/exhibits/show/conservation-treatments/drawings---watercolors/landscape-with-pond

Your current search criteria is: Objects is "Landscape with Pond".