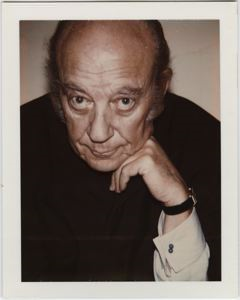 A member of the Rothschild banking dynasty, Baron Philippe de Rothschild (1902-1988) was a Grand Prix racecar driver, a screenwriter, a playwright, and a successful wine grower. Many of his wines were self-bottled with labels produced by famous artists such as Marc Chagall, Pablo Picasso and Andy Warhol. In 1962 he created the Museum of Wine in Art at Mouton, France, featuring original art by Pablo Picasso and rare glassware. Warhol designed a label for one of his bottles in 1975.