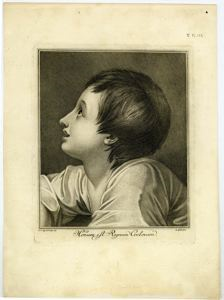 
Object Type: PRINTS
Creation Place: North America
Medium and Support: Engraving
Accession Number: 05-G-3313(3)
This engraving is a detail of an earlier version [see 05-G-3313(4)] commissioned by Swiss physiognomist, J.C. Lavater, after a painting gifted to him by the artist Benjamin West. This engraving appeared in a later French edition of Lavater's book, Physiognomische Fragmente. The subject is from Matthew (19:14): "Suffer the little children, and forbid them not, to come unto me: for of such is the kingdom of Heaven."