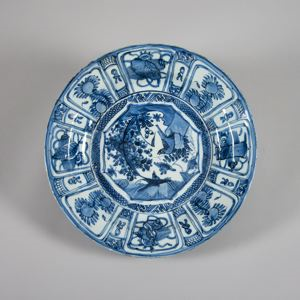 This dish is typical of blue and white porcelains made in the late Ming Dynasty for both domestic and foreign markets. The design was so popular that it was commonly copied by the Japanese starting in the early 17th century, and later by the Dutch at Delft. Dishes in this style were also popular in the court of the Ottoman Turks and a wide variety of them survive at the Topkapi Saray Museum, Istanbul.

The pattern is composed of an outer rim band of eight alternating stylized flowers and Buddhist symbols, separated by eight diaper and pearl string panels. The interior is decorated with a bird standing on a rock beneath a flowering bush within an octagonal floral reserve. The obverse of the dish is decorated with eight perforated circular panels separated by three vertical lines.

Your current search criteria is: Portfolio is "17th Century Gallery".