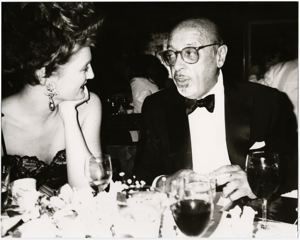 Ahmet Ertegun (1923â2006), a Turkish-American musician and businessman, was the founder and president of Atlantic Records. Rolling Stone magazine described him as âone of the most significant figures in modern recording.â Ertegun and Warhol were both involved with The Velvet Underground, a highly-influential American rock band from the 1960s which Warhol introduced as his studio band at the Factory in 1963. Atlantic Records produced The Velvet Undergroundâs final album, Loaded, featuring lead singer Lou Reed in 1970.
Current Location: In Storage

Your current search criteria is: Objects is "Ertegun, Ahmet and Unidentified Woman".