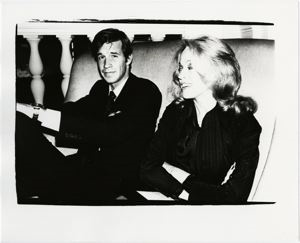 Warhol described an interesting encounter in his Diaries with wealthy New York socialite Jill Fuller. She rented a helicopter to travel with Warhol and his companion Catherine Guinness (of British peerage), to the Nassau Coliseum to attend a Pink Floyd concert. Warhol wrote,

Picked up Catherine (cab $4). Went to Jillâs. Jill gave us a bottle of champagne and we took a cab to the helicopter (cab $3). It was a beautiful beautiful ride, we drank the champagne. Four limos were waiting. (Feb 27, 1980)

Warhol meticulously recorded expenses in his Diaries, as from 1972 onward he was regularly audited by the IRS.

Your current search criteria is: Objects is "Fuller, Jill and Unidentified Man".