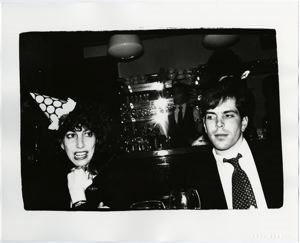 Susan Blond is an artist and publicist who worked on the promotion of Andy Warholâs Factory and Interview magazine. In the 1970s, she became involved in films such as Andy Warholâs Bad (1977). She also worked on press campaigns with United Artists and Epic Records, promoting musicians such as Ozzy Osborne, Culture Club, Cyndi Lauper, Sade, Tina Turner and Michael Jackson. She and Warhol developed a strong friendship, and he proclaimed he would make her a star â though this is a common statement he made throughout his Diaries. Blond is currently President and CEO of Blond, Inc., a public relations company based in Manhattan.

Your current search criteria is: Objects is "Blond, Susan and Unidentified Man".