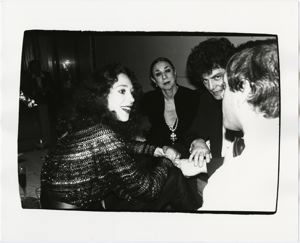 Marisa Berenson (1947- ) is an American actress and model who appeared on the covers of Vogue and Time. Yves Saint Laurent dubbed her the âGirl of the Seventies.â Her maternal grandmother was Surrealist fashion designer Elsa Schiaparelli. D.D. Ryan (1928?â2007) worked as an editor at Harperâs Bazaar and was a regular on the best-dressed fashion lists. She was friends with many artists, musicians and writers, and she designed costumes for Truman Capoteâs play, House of Flowers. Steve Rubell (1943â1989) managed the legendary nightclub Studio 54 from 1977 to 1981, which was frequented by Warhol. Similar in atmosphere to the Factory, the club mixed beautiful "nobodies" with glamorous celebrities.