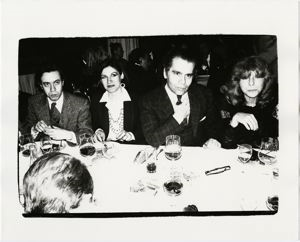 Karl Lagerfield (1933?- ), a German fashion designer, artist and photographer based in France, is head designer and creative director for Chanel. He also has his own label, which was admired by celebrities such as Elizabeth Taylor. He was involved in Warholâs 1973 film, LâAmour. Paloma Picasso (1949- ) has designed fashion jewelry and created works for Tiffany and Co. since 1980. She briefly stopped designing after the death of her father, artist Pablo Picasso, in 1973. She and her then-husband, playwright and director Raphael Lopez Sanchez (a.k.a. Raphael Lopez-Cambil) (1948?- ), frequented high society gatherings in New York City, Paris and Barcelona in the 1970s and 1980s. Warhol completed a screen print entitled Paloma Picasso, Homage Ã  Picasso, which referenced her fatherâs contributions to Cubism.