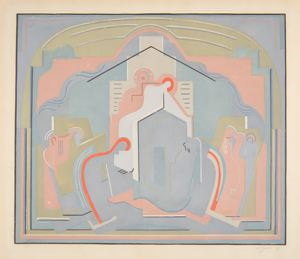 Albert Gleizes was a founding member of the Section dâOr (Golden Section) (or Puteaux Group), a collective of artists, poets and critics associated with Cubism from about 1910 to 1914. He exhibited in the Cubist âSalle 41â of the Salon des IndÃ©pendants of 1911 and also in the Salon de la Section dâOr of 1912. That same year, he co-authored a major treatise on Cubism with fellow artist Jean Metzinger, entitled Du âCubismeâ (On Cubism). During the 1920s and 1930s, he was involved with LÃ©once Rosenbergâs Galerie de LâEffort Moderne in Paris, which represented an international array of Modern artists including Pablo Picasso, Georges Braque, and Fernand LÃ©ger.

While many artists involved in the Section dâOr later experimented with other styles, Gleizes remained a steadfast proponent of Cubism throughout his life. Despite his progressive interest in Modern art, many of his aesthetic theories looked back to earlier time periods. He argued that Cubism recovered artistic principles used in Romanesque murals, and offered a new artistic direction which carried the potential for social and spiritual renewal.

During the late 1920s, Gleizes lived in a rural artist collective in southeastern France, and he began making artworks with overtly religious subject matter. He created paintings for the church of Saint-Blanche de SerriÃ¨res, and he also produced related drawings, gouaches, and pochoirs such as this Descent from the Cross, which transforms a traditional Christian scene into a Cubist harmony of abstract colors and lines.

Your current search criteria is: Objects is "Descente de Croix (Descent from the Cross)".