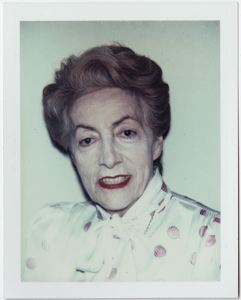 Bronka Weintraub (1905?-2001) was married to Jacob D. Weintraub, a collector and dealer of German Expressionist art, and owner of the Weintraub Gallery in Manhattan. Her husband was a Holocaust survivor and published the 1994 book, "Jacobâs Ladder: From the Bottom of the Warsaw Ghetto to the Top of New Yorkâs Art World." The Weintraubs were major philanthropists to Jewish and Israeli medical institutions. Both had their portraits painted by Warhol in 1986.
Current Location: In Storage

Your current search criteria is: Objects is "Weintraub, Bracka".