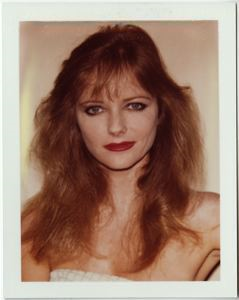 Cheryl Tiegs (1947- ) is an American actress and supermodel who at 17 years of age appeared on the covers of popular magazines such as Glamour, Harperâs Bazaar, Elle, Time and Vogue. She also established a long-running affiliation with the Sports Illustrated Swimsuit Issue. The 1978 Sports Illustrated poster of Tiegs in a pink bikini became an iconic pop culture image. Warhol records several encounters with Tiegs in his Diaries:

Ran into Peter Beard and Cheryl Tiegs on the way to Le Club and they gave me a rideâ¦. I said that Cheryl should look more glamorous and beautiful when she goes out if sheâs going to be the number-one top beauty in the world. She looked good, but plain. She wears the worst, funny clothes. (January 12, 1980)

Your current search criteria is: Objects is "Tiegs, Cheryl".