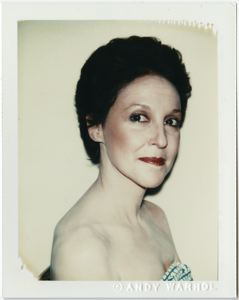 Barbara Slater and her husband David B. Slater are contemporary art collectors based in Boston, Mass. It is possible that Warhol was referring to this couple in his Diaries when he recorded a lesson about selling portraits:

Iâve redone the portrait of a lady from Boston.... I learned a lesson: I should never show a portrait when I know it isnât right. The first time around I knew Iâd made her look like a horse, and still I showed it to them. And the thing is, this womanâs actually nice-looking, itâs just one of those people who photographs all the wrong way â all the bumps are in the wrong places. Like the bump of her nose just goes the complete wrong way in pictures, and itâs actually a perfect nose in life. But now they loved them, they took three. (July 10, 1985)

Your current search criteria is: Objects is "Slater, Barbara".