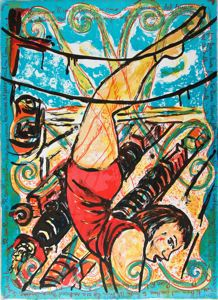 R Cigarro, R Barril is one of the first collaborative works created by Marta Sanchez and Norma E. CantÃº. The collaboration started by combining the artist and poetâs personal experience with the train yards. The figure is a Carpas or vaudevillian performer that travels throughout the train yards of Mexico and Texas. The Carpas refer to the tents the performers used to stage their small-scale circus acts, such as trapeze, tightrope, dancing, and animal acts. The comical performances were satirical as well as socially and politically charged.

The print was created at the Brandywine Workshop during the time Transcendental Train Yard suite was initially being created at the Coronado Studio in Austin, Texas. Norma E. CantÃºâs contribution to this collaboration was a poem based on a childhood song âRR con RR cigarroâ that becomes a reflection of time and personal journey.