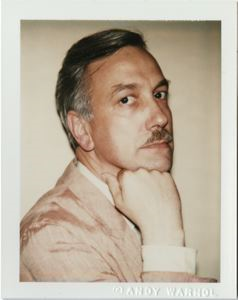 Mr. Koenige, a.k.a. Rolf Hoffmann (1934â2001), was the director of van Laack, an international fashion company. He and his wife, Erika Hoffmann-Koenige, collected contemporary art since the early 1960s and established an important private collection in Berlin, the Sammlung Hoffmann, which is open to the public on Saturdays. In an interview with InitiArt Magazine, Erika Hoffmann-Koenige described Warholâs modeling appearance at a van Laack Fashion Show in New York in 1982: âOn the catwalk, he was, smaller and much shyer than his radiant female colleagues, seriously focused to pose and perform. Amidst the TV glamour, the flashes, and the music that was a touching moment.ââ

Your current search criteria is: Objects is "Koenige, Mr. (Husband of Erika Hoffman)".