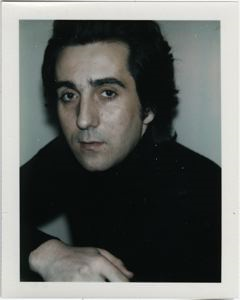 Luciano Anselmino (1940?-1985?) was an Italian art dealer and art collector. He introduced Warhol to the Surrealist artist Man Ray; and he commissioned an edition of 100 prints of Man Rayâs portrait. Anselmino was present at the photo session at Man Rayâs Paris apartment on November 30, 1973, during which Warhol and other attendees snapped photos of Man Ray and each other. It was toward the end of that session that Warhol captured the iconic image of Man Ray with cap and cigar, from which he produced the final silkscreen portrait of the artist. Anselmino later encouraged Warhol to work on other artistic projects, such as the Ladies and Gentlemen portfolio of screenprints, published in 1975.

Your current search criteria is: Objects is "Anselmino, Luciano".