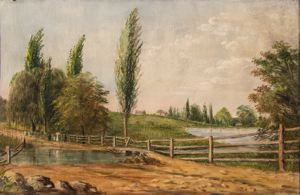 Anna Peale Sellers was the granddaughter of Charles Willson Peale through his daughter Sophonisba. She studied in Rome during the 1860s and at the Pennsylvania Academy of the Fine Arts in the late 1870s and early 1880s.

As noted on the reverse of the work, this scene is copied from a work by Sellers' grandfather, Charles Willson Peale. In an 1818 letter to his son Rembrandt about the view depicted here, Charles wrote: "I have chosen two views which I wish to paint. One is at the beginning of the rise of the high hill leading to Germantown. It takes in my obelisk, Barn and mansion House and both the Summer Houses--The Gate & willow tree on the left, the hill back of the Garden; the road, the water in the road & mill race, and a piece of Mr. Wister's wood for a finish on the right of the picture."

Peale resided at Belfield, his âretirementâ home, from 1810 to 1821, and his house still stands on La Salle University campus. In 1826, Belfield was sold to neighbor William Logan Fisher. That same year, Fisher gifted the house to his daughter, Sarah Logan Fisher upon her marriage to William Wister. The house remained in the Wister family until 1984, when it was acquired by La Salle University.