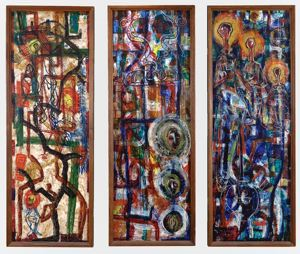 Keene was born in Philadelphia and earned a B.A. and a M.F.A. from Temple University's Tyler School of Art, both in 1948. He served as a Tuskegee Airman in World War II, and then lived several years in Paris and in Haiti before returning to teach at Philadelphia College of Art and Bucks County Community College. Keeneâs artworks were inspired by his personal experiences at home and abroad. He was particularly captivated by the religions and musical traditions he encountered in his travels.

In this artwork Keene highlights on the themes of religion and music through the incorporation of Haitian Voodoo subjects and ritualistic symbols. Several haloed musicians engage in drumming practices often associated with Haitian rituals and ceremonies. The middle panel features two symbols of Haitian Voodoo gods, Damballah and Ayida. The ancient male and female counterparts, symbolically represented as snakes, embody the cosmos coiled around the world. Keene also symbolically integrates Christianity by including Trinitarian references such as the tripartite composition and the addition of three drummers in the far right panel.


Portfolio List Click a portfolio name to view all the objects in that portfolio
This object is a member of the following portfolios:

Your current search criteria is: Objects is "Haitian Voodoo Spirits".