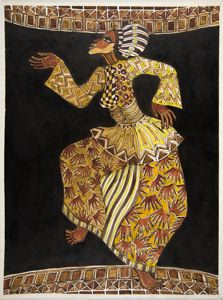 Searles was an important African American artist from Philadelphia, educated at the Pennsylvania Academy of the Fine Arts. He traveled to West Africa in the 1970s, at a time when many African American artists were exploring their ancestral African roots. His artwork reflected not only the changing social times but also his evolving vision as an individual who came to embrace universal cross-cultural connections. He created paintings and sculptures that responded to African, Japanese, and Indian cultural traditions, and that often included abstract references to music as well as dance. Searle often listened to jazz as he worked, and music was an integral part of his life. In the 1970s he played percussion with the Afro-American Dance Ensemble in the Ile Ife Cultural Center in Germantown. His dancer paintings were inspired by the Ile Ife dancers, with colorful visual repetitions evoking the rhythms of percussion.
Current Location: In Storage

Your current search criteria is: Objects is "Dancer #5".