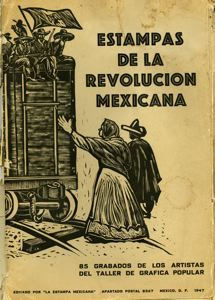 
Object Type: PRINTS
Creation Place: North America, Mexico
Medium and Support: Letterpress
Accession Number: 17-G-5010(1-78)
This is a 1947 portfolio of 85 loose prints by 16 artists of the Taller de GrÃ¡fica Popular (Peopleâs Graphic Workshop, commonly known as the TGP), a graphic art collective founded in Mexico City in 1937. TGP artists shared liberal, leftist politics and advocated the use of art to advance social and political causes. Aiming to reach a broad audience, TGP artists utilized inexpensive wood and linoleum block prints to communicate their views on social and political issues, such as the exploitation of the poor, land ownership, U.S. imperialism, and racial discrimination.

The prints in this portfolio depict scenes from Mexican history from the 1870s to the 1940s, concentrating on the Mexican Revolution (1910-1920), and the dictatorship of President Porfirio DÃ­az (1876-1911). The portfolio contains a letterpress prologue signed collectively by the 'artists of the Taller' (20 November 1947), an index of the prints with a description of each written by Alberto Morales Jiminez, and a 'Declaration of the Principles' of the Taller (all in Spanish).