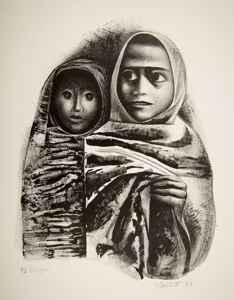 The Indian women and children in these prints have simplified facial features accentuated by the rebozos or shawls wrapped around their heads. Rebozos were a common garment worn by women of all social classes in Mexico. With Mujer Con Rebozo, Catlett emphasizes the womanâs powerful hands, suggestive of her working class status, and her intense shadowy gaze into the distance. With Rebozos, Catlett creates a serene yet haunting image of two children, the younger projecting a waif-like appearance. Due to Catlettâs manipulation of the lithographic process, the drapery lines begin to dissolve in the lower portion of the composition, accentuating the other-worldly affect.
Current Location: Storage : Works on Paper : 20x24 : 4.2.84

Your current search criteria is: Objects is "Rebozos".