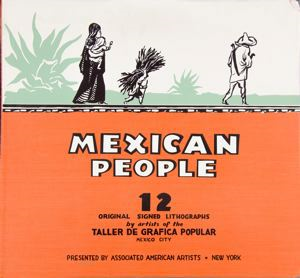 
Object Type: PRINTS
Creation Place: North America, Mexico
Medium and Support: lihograph
Accession Number: 13-G-3549A
This is a portfolio of 12 prints titled, Mexican People: Lithographs of the Taller de GrÃ¡fica Popular, published in 1946 in an edition of 250 by the Associated American Artists in New York. The portfolio aimed to showcase the labor that went into products that were exported from Mexico into the United States. The TGP artists received funds to travel to the provinces in Mexico to witness people at work in the rural areas of the country. The location of the scenes depicted in the prints is indicated on the illustrated map of Mexico. Each print is accompanied by text written by the artists in 1946.

Taller de GrÃ¡fica Popular (Peopleâs Graphic Workshop, commonly known as the TGP), was a graphic art collective founded in Mexico City in 1937. TGP artists shared liberal, leftist politics and advocated the use of art to advance social and political causes. Aiming to reach a broad audience, TGP artists utilized inexpensive wood and linoleum block prints to communicate their views on social and political issues, such as the exploitation of the poor, land ownership, U.S. imperialism, and racial discrimination.

From the introductory pages:
âWe believe that the plastic development of these themes offers the possibility of giving expression both to the landscape of the different regions of Mexico as well as to the character of the men who inhabit these different regions; the physical aspects and the habits and customs of these people; also the process of work in the manufacture of the different products; and finally the social drama which surrounds the work of the Mexican in these occupations.â
â Leopoldo Mendez
Current Location: Storage : Works on Paper : 16x20 : 4.1.80