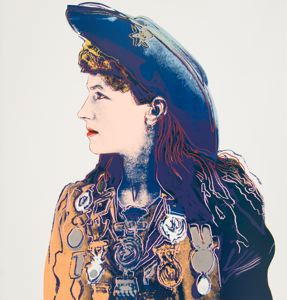 
Object Type: PRINTS
Creation Place: North America
Medium and Support: Screenprint on Lenox Museum Board
Credit Line: Gift of The Andy Warhol Foundation for the Visual Arts
Accession Number: 13-G-3571
Andy Warhol established his career on Americana subjects, including the Wild West. This print is of Annie Oakley, a popular sharpshooter performer in the Buffalo Billâs Wild West Show. Despite being from Pennsylvania, the traveling showâs sensationalized version of the Wild West allowed Oakley to become a symbol of the Wild Westâs mythology. Her most famous trick was shooting a gun backwards and never missing her target, one of which included a cigarette in the Kaiser of Germanyâs mouth. As part of her legacy and mythos, Oakley allegedly asked to shoot a second shot after the Kaiserâs role in WWI. She would later retire due to an injury and advocated for womenâs rights, even teaching sharpshooting as self defense. The print colorfully outlines Oakleyâs medals, highlighting her accomplishments as a historical and cultural icon. Today we can criticize the inaccurate portrayals of the Western genre and Warholâs use of the screenprints-- creating flat, vivid, and stylized images- highlights the artifice of the Wild West and Oakley created by pop culture.