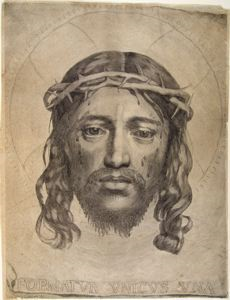 The Sudarium, or the Veil of St. Veronica

Mellan developed a distinct manner of engraving. To the delight of art critics, he defined forms using mainly parallel lines, with no outline and minimal crosshatchÂ­ing. Some lauded his ability to mesmerize viewers who are compelled to scrutinize the lines on the surface of the print even as the form eludes them in the process.The avid print collector and connoisseur Michel de MaÂ­rolles, the Abate of Villeloin, gave the artist the idea for this celebrated print of the Sudarium. With one line, beginning at the center of the composition on the tip of Christâs nose and spiraling outward, the printmaker creÂ­ated the image of the impression made by Christâs face on St. Veronicaâs veil, providing what is thought to be His only authentic portrait.

The inscription âFormatur unicus una, non alterâ inÂ­forms us that the composition was completed with one line, and dares others to replicate it. Mellanâs biographer Pierre Mariette states that others did try but failed.

Your current search criteria is: Related to "Claude Mellan".