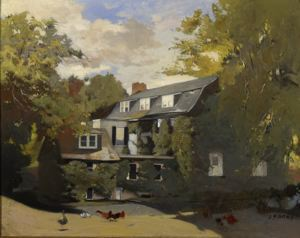 Born in Kentucky, Hanes moved to Philadelphia and studied at the Philadelphia Museum School, the Barnes Foundation, and the Pennsylvania Academy of the Fine Arts. In 1951 he won the Prix de Rome, which enabled him to study art at the American Academy in Rome and to travel throughout Europe for three years. Hanes founded La Salle Universityâs Fine Arts Department in 1965 and served as an artist-in-residence and art instructor for more than 30 years.

This painting depicts the back of âBelfield,â which until the 1980s was the oldest operating farm in Philadelphia, and now part of La Salle University campus. In 1810, at 69 years of age, Charles Willson Peale, Americaâs most prominent colonial portrait painter took up residence at this 100-acre estate, where he pursued farming and landscape gardening until 1826. The house is now a National Historic Landmark.
Current Location: Art Museum : 20 C Hallway

Your current search criteria is: Related to "James Hanes".