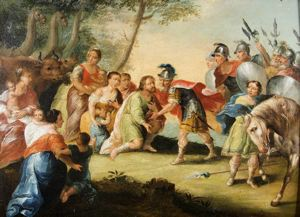 
Object Type: PAINTINGS
Medium and Support: Oil on board
Accession Number: 17-P-605
This painting reproduces a work by Peter Paul Rubens and his student, Erasmus Quellinus, dating from 1633-1655, now located in Kunsthistoriche Museum in Vienna. The original painting was reproduced in an engraving by Austrian artist Anton Joseph von Prenner, published in the Theatrum Artis Pictoriae in four volumes from 1728-1733. (Below, left to right.) This project documented paintings in the Imperial art collection in Vienna and was likely inspired by new displays in the Stallburg gallery. Also involved were Flemish court painter Frans van Stampart and other artists, some of whom made painted copies of these great works.

The painting depicts the heartfelt reunion of Jacob and his brother Esau, as described in Genesis 33: 1-4. âJacob looked up and there was Esau, coming with his four hundred men; so he divided the children among Leah, Rachel and the two female servants. He put the female servants and their children in front, Leah and her children next, and Rachel and Joseph in the rear. He himself went on ahead and bowed down to the ground seven times as he approached his brother. But Esau ran to meet Jacob and embraced him; he threw his arms around his neck and kissed him. And they wept.â
Current Location: Art Museum : 18 C Gallery

Your current search criteria is: Related to "Unknown Artist" and [Objects]Century is "18th Century".