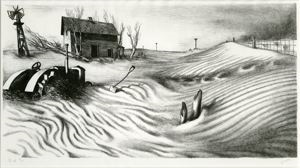 Born in Baltimore, Jules attended the Maryland Institute College of Art from 1932-1934, and he later studied at the Art Students League in New York City under Regionalist artist Thomas Hart Benton. Jules was an accomplished painter and printmaker whose artwork focused on Social Realist themes, such as the plight of the poor. He often employed satire and caricature to dramatize social issues in a style reminiscent of 19th-century artist HonorÃ© Daumier.

Dust portrays a desolate landscape of the American Dust Bowl in the early 1930sâa landscape devoid of human presence with eroded soil blown over unused farm machinery. This print, made while Jules was a student in Baltimore, was exhibited in the first national exhibition of the American Artistsâ Congress as part of 30 duplicate âsocially-consciousâ exhibitions held in 30 American cities in December 1936, with the activist agenda of encouraging contact between artists and their audiences and furthering the democratization of art.