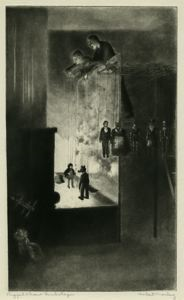 Born in Wisconsin and active in Chicago and the MidÂ­west, Morley was a member of the Prairie Print Makers and Chicago Society of Etchers. After serving in World War I, Morley entered the Academy of Fine Arts in Chicago and worked as a commercial artist. From 1942- 1946 he was employed as a draftsman for the Corps of Engineers in the War Department.

Morleyâs Puppet Show Backstage depicts a popular subÂ­ject associated with the Federal Theater Project, which was created in 1935 to employ theater workers. Puppet shows could be produced with small budgets and few workers but could entertain many people, especially youth, in rural communities that could not support a large theater. Additionally, puppet shows had great apÂ­peal during the WPA era for their instructional value for youth. Performers could use puppets not only to instruct children about arts and crafts, but also to illustrate clasÂ­sic stories and fairy tales, and even to teach about health issues, morality, and safety. Puppet-making workshops were held all over the country for youth to learn to build their own puppets; and for some children in rural comÂ­munities these puppets became one of the few things they owned.