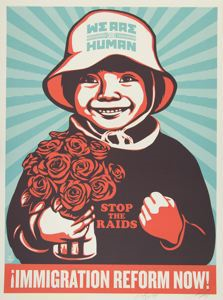 I am an immigrant. My ancestors left England and Scotland to come to this land to create a better life for themselves and their families. America is a land of immigrants. Ironically, the peoples who this land was inhabited by before âAmericansâ were Native Americans of North and South American descent. I bring up this history not to stir up controversy or animosity, but to simply point out the complexity of who is entitled to live here. Something that is not complex and should not be controversial is the right of all humans to be treated like humans. People coming to America for the same reasons our ancestors did deserve human rights. The United States was created by immigrants and now our country needs immigration reform. I collaborated on this project with my co-worker Ernesto Yerena who shot the photos and helped with the graphics. Zack De La Rocha and Producciones Cimarron provided input and support. All the proceeds from these posters go to creating materials for the May Day marches and donations for immigration reform organizations. Thanks for supporting human rights!