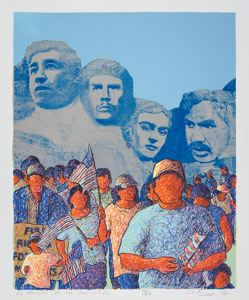 La Marcha de Los Desvalidos (The March of the Powerless)

As an expressionistic printmaker, I use distortion and exaggeration for emotional effect. I apply vivid and dynamic color, overlapping transparent color with opaque color. I combine flat space with cubical space. I merge abstraction, simplification, and realism. I juxtapose and superimpose unlikely images of realism, icons, symbols and fantasy from history and the contemporary world to foster opportunities for the bending of meaning and the warping of time and place.

In this silkscreen I combine my reinterpretation of Mount Rushmore with the May 1, 2006 national rally, "A Day without Immigrants." I use Mount Rushmore which is one of the most recognizable icons of the U.S. I replace the heads of the four U.S. presidents with the Latino portraits of Che Ernesto Guevara, Frida Kahlo, CÃ©sar Chavez and Rodolfo Corky Gonzales. May 1, 2006 was an important day in U.S. history: 10 million immigrants, activists and allies in over 200 cities from across the country chose to skip work, school, and the normal daily routine to participate in "A Day without Immigrants." A national boycott, general strikes, rallies and symbolic actions were held in order to demand basic rights for all immigrants, and to build a new multi-ethnic united civil rights movement.

As a contemporary Chicano printmaker, I note the changing demographics of this country as the Latino population increases. Our southern border is no longer just El Paso, JuÃ¡rez, San Diego or Tijuana. The border also exists here in Denver, in Los Angeles and in Phoenix. It either expands or is shot full of holes. Cultures and languages mutually influence each other. The U.S. is indeed the final destination of many human migrations, the result of multiple factors like unemployment, overpopulation and especially the enormous economic disparity between North and South. My artwork reflects the integration of culture, history, religion and the changing demographics of Latinos in the U.S.