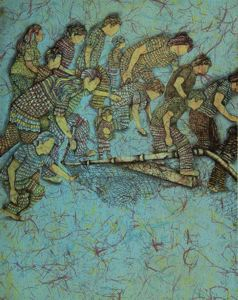 This print is based loosely on a couple of events that happened when immigrants were being chased by the border patrol. As you examine the print there is a little girl in the middle of the print. One of the events described a little girl being trampled by the other immigrants as they ran from the border patrol. The gate is a chain link fence that signifies our over expenditure on building walls at the border that do not work and only cause consternation between the local communities on both sides of the border. Many other figures signify other extremes of the migrant cause including pregnant women. The translation is a play on words with the direct translation. But I felt it worked as the culture and the people can be described as happiness and we as a culture are always in pursuit of this unattainable object. Persecucion would translate directly to âpersecution,â but I felt that a more common phrase and one used by popular culture would still be in keeping with the meaning of the artwork.