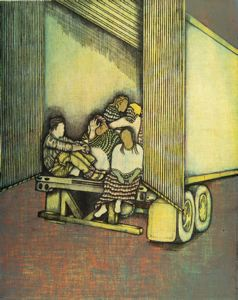 A "coyote" who was trafficking immigrants was driving a truck with people in the back of the truck. When a border patrol agent passed him on the highway, the "coyote" became afraid, pulled over and abandoned the truck fearing going to jail. It was not until a couple of days later that the truck was inspected, because the border patrol never attempted to stop the truck. Unfortunately the truck was locked from the outside and the immigrants were unable to exit the vehicle.