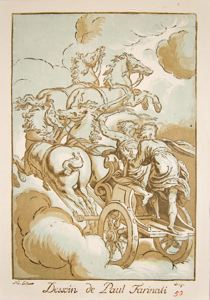 Elijah and the Chariot of Fire


Object Type: PRINTS
Creation Place: Europe, France
Medium and Support: Chiaroscuro woodcut
Credit Line: Purchased with funds provided by the Art Angels
Accession Number: 14-G-3606
This print by Nicolas Le Sueur is after a fresco by Paolo Farinati in the Marogna family chapel in the church of San Paolo in Campo Marzio, Verona. The image depicts Elijah the prophet lifted up to Heaven in a whirlwind by a chariot of fire and horses (2 Kings 2:3-9).

The print has also sometimes been described as depicting Phaeton and Helios (or Apollo) in the chariot of the sun, from Greek Mythology.

The Second Book of Kings 2:11 relates how the Old Testament prophet Elijah was speaking with his follower Elisha when âbehold, there appeared a chariot of fire, and horses of fire; which parted them both asunder; and Elijah went up by a whirlwind into heaven.â Here, Elijah is represented in a dynamic pose, with his hands clasped together in prayer. He stands behind an angelic driver, who leans forward and lifts his whip to hurry the four horses upwards into the light-filled heavens.
Current Location: Storage : Works on Paper : Drawers : D12


- Between Heaven and Hades: Journeys in Renaissance and Baroque Prints, Curated by Dr. Klare Scarborough and Dr. Susan Dixon, La Salle University Art Museum, September 13 - December 15, 2017.
Dimensions
Portfolio List Click a portfolio name to view all the objects in that portfolio
This object is a member of the following portfolios:

Your current search criteria is: Portfolio is "Baroque Art" and [Objects]Country is "France" and [Objects]Object Type is "PRINTS".