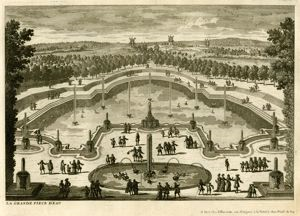 This intricately shaped water basin is located on the east/west axis of the garden at Versailles, near King Louis XIVâs palace. Created in 1676 during one of many building campaigns, it is the largest basin in the garden. Its spouts were said to shoot water 60 feet into the air, an amazing feat in that day. A statue of Neptune, which gives the basin its current name, the Neptune Basin, was added in 1740.

The Perelles â father Gabriel and sons Nicolas and Adam -- were known for visually documenting the kingâs garÂ­den, among many sites in and around Paris. Here they chose a high vantage point that creates the illusion that the site is never-ending. The endless vista is characterÂ­istic of the Baroque period, and here signals Louis XIVâs aspirations for limitless power. The windmill in the far background refers to the water pumps needed to keep the fountains in operation. Supplying water to the vast garden was a challenge for the hydraulic engineers at the French court.

Your current search criteria is: Portfolio is "Baroque Art" and [Objects]Country is "France" and [Objects]Object Type is "PRINTS".